A Guide to Planning a Trip to Fathom Five National Marine Park, Ontario

Published by To Do Canada On February 7, 2017 3 Responses

The clear blue waters of Lake Huron bear deep secrets about ancient boats that sailed in them centuries ago. Boats, whose captains had to navigate in unforgiving darkness inevitably losing the battle against the merciless forces of nature. Today 22 of these barges, schooners and steamers lie shipwrecked at the bottom of the Georgian Bay creating one of the most fascinating diving sites in North America.

Fathom Five National Marine Park is the gateway to these historical shipwrecks. The park covers an area of 130 square kilometres of surface water surrounding 20 islands on the northern and eastern sectors of the Bruce Peninsula.

The park’s islands, which are part of the Great Lakes formation, were formed about 400 million years ago as coral reefs. As the ocean receded the reefs transformed into dolomite a rock that is harder than limestone. Further erosion gave rise to imposing cliffs dotted with grasses and trees. The isolation of the islands from the mainland resulted in unique ecosystems with each of them having a version of nature that is peculiar to itself.

Things to Do at Fathom Five National Marine Park

Fathom Five National Marine Park offers you a thrilling combination of land and water adventures. Its astounding rock formations known as flowerpots await your exploration. Take a deep dive into the waters of Lake Huron and a wealth of submerged wonder will welcome you.

Like much of the Bruce Peninsula this marine park hosts several species of orchids including the calypso orchid which comes alive on Flowerpot Island between mid-May and early June. The marine park also has its very own cliff-edge ecosystem.

My hubby spotted this elusive Calypso orchid on Flowerpot Island (finally!), after we had been spending hours searching for it, we had sighted various wild orchids except this princess! hard to find. This short (3-5"), secretive and pretty orchid only grow sporadically in small area on this little island in whole Ontario🐼

Islands that are close to the mainland like Cove Island are home to many of the animals that can be found on the mainland; these include bears, deer and rattlesnakes. On the other hand, as you move further into the bay you will find garter snakes and red squirrels on some islands.

If you are an experienced kayaker or canoer, then the Islands of the Park are yours to explore!

The 2 km² island, is only island that is accessible to those who do not have a watercraft at their disposal. You can take private tour boats to reach the Island. The island got its name from its natural ‘flowerpot’ rock formations that are a sight to behold as you hike through its trails. Picnic at Beachy Cove or at the flowerpots. The shoreline is rocky and the water is cold. You can swim if you like in the cyrstal clear waters.

Beachy Cove is where the tour boats leave you. There are two flowerpots which you can access through hiking. From the Beachy Cove, go east on the Loop trail that skirts the shoreline to reach the ~ 7m tall small flowerpot. Further along the shore you will find the large flowerpot that originally beckoned you too visit the park. Beachy Cove to Lightstation is approximately 30 minutes 1 way. If short on time you can return back to Beachy Cove. Plan for 90 minutes.

Continuing along the trail will guide you by a small cave to the Flowerpot Island Lighstation. There are steep stairs on the way to the cave. You can continue along the rugged section of the trail over the bluffs in the middle of the Island to reach back Beachy Cove. Loop Trail from Lightstation to Beachy Cove takes about 45 minutes.

This was an epic hike #hikingadventures #flowerpotisland #tobermory #brucepeninsula #peaceful

Marl Trail: This Trail that intersects Loop Trail in the interior of the Island takes you to the Marl Beds on the Western side of the Island. Approximated 45 minutes from Beachy Cove.

Originally built in 1897, the lighthouse at the Flowerpot was replaced with a replaced with a steel tower. The keeps home maintained by Friends of Fathom Five National Marine Park has a small museum which is open during summer. There is also a viewing platform about minutes from the lighthouse.

Ever wondered what it was like to be a lightkeeper many decades ago? The volunteers at the lightstation on Flowerpot Island can take you back in time. This is also the place to pick up some snacks and cold drinks. 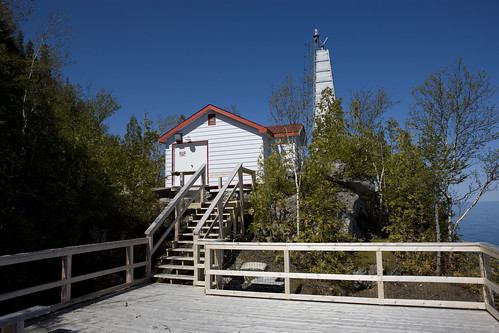 Fathom Five National Marine Park, preserves 22 shipwrecks including schooners, barges and steamers that are amongst the oldest and best-preserved wrecks in Canada. You have a choice of more than a dozen dive sites from the 213-foot steamer, W.L. Wetmore, to the the wrecks of Barque Arabia off Echo Island, offer experiences for all levels of qualified divers.

All divers must register at the Parks Canada Visitor Centre in Tobermory.and it will only cost you $4.90 per day to register or you can pay $19.60 for an entire year.

Dark Skies: Fathom Five National Marine Park is a designated Dark Sky Reserve. Enjoy the shining stars and celestial displays as you camp out under the night sky.

Fathom Five National Marine Park has special programs designed to educate and entertain young minds. These include the Escarpment Explorer Hike, Full Fathom Five Hike, Singing Sands Hike and Medicine Walk. The hikes are designed for Grades 7 to 12 in groups of up to 60 students.

How to get to Fathom Five National Marine Park

Tobermory located on the the Northern most tip of the Bruce Peninsula is the best place to to set up a base for your trip. Highway 6 takes you to Tobermory. Flowerpot Island is 6.5km from Tobermory harbour and reached only by boat.

The National Park Visitor Centre located in the village of Tobermory, is the hub for Fathom Five National Marine Park and Bruce Peninsula National Park. You can get all the information you to need to plan your trip here.

Visitor Centre Address: 120 Chi Sin Tib Dek Rd, Tobermory. The map below shows you the location of the visitor centre.

How to visit Flowerpot Island and Tour the Wrecks

Blue Heron Cruises, and the Bruce Anchor Cruises (7468 Hwy. 6, North Tobermory)located at Tobermory, offer a variety of cruises including sunset cruises around the islands of the conservation area and trips to Flowerpot Island. You can chose from glass-bottom boats to jet boats to reach the Island and tour the rugged shorelines and crystal clear waters surrounding Tobermory and Fathom Five National Marine Park. Glass-bottom boat tours offer a sneak peak into the wrecks that lie underneath the Georgian Bay.

WHEN: Mid May to End of October from approximately 09:00 AM to 05:00 PM (weather permitting/vary with season)

All Boat Tours depart from Little Tub Harbour in Tobermory.

How to visit Fathom Five National Marine Park, if you do not have a car:

Approximate Cost: Adults $89, Students / seniors$80, Children: $45 for a round trip. You should plan your accommodation in Tobermory or at campgrounds in the National Park or Bruce Peninsula National Park.

Greyhound Canada offers bus service to Owen Sound from Toronto or other major cities. From Owen Sound, First Student Canada runs bus services to Tobermory in time for M.S. Chi-Cheemaun Ferry to Manitoulin Island on Fridays to Sundays and Holiday Mondays from July to Labour Day.

Boat Tours to the Island costs around $40 for adult and $30 for children above 5.

Where to Stay Within the National Park

Fathom Five National Marine Park has a six tenting sites on Flowerpot Island where you can pitch your tent on a raised platform. It costs $9.80 per person, per night to stay at any of the sites and advance booking is required. You should also be aware that there is no tapped water on the island and you will need to bring your own or purify bay water. Bad weather can also see you spend an extra day or two on the island so be prepared.

Where to Eat: You buy snacks at the lowerpot Island Light Station. Cash Only.There are plenty of dining options at Village of Tobermory.

There are plenty of choices at Tobermory -From campgrounds/ RV Parks to Bed & Breakfast to Cottages.

How long to Stay: Plan for half a day at the Flowerpot Island and another half a day exploring the trails that run from the visitor centre through Tobermory.


Amenities within the Park

Flowerpot Island is the only island one on the park with basic amenities like washrooms, picnic tables and a picnic shelter. There are picnic tables at the lightstation and near the Floowerpots.

For those taking the cruise, you can park at the parking lots operated by the cruise company. 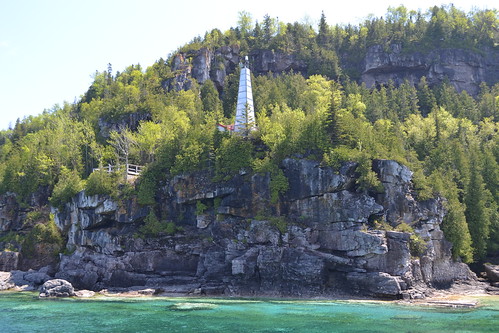 Accessibility: Cruise Boats are Accessible as is the dock at the Flowerpot Island. The trail Fathom Five National Marine Parkis accessible until the Flowerpots from the Beachy cove.

More about the Park

Canada Gets a New Loonie That Commemorates Klondike Gold Rush