24 Things to Do This Summer in Lennox and Addington

Published by To Do Canada On July 2, 2021 Leave a response

Stretching from Napanee, through Kaladar and up to Denbigh, the county of Lennox and Addington packs a lot of action into its woods and lakes. It has some great tourist attractions for families looking to play, swim, hike or hand out with bees, birds or even rescued farm animals. There is much to explore from its tip to its tail.

(All activities are free unless otherwise noted in the listing.)

You may also like: Winter in Lennox and Addington

Eye-popping views from a huge boulder

Hiking around the Sheffield Conservation Area will make your heart race but the views are worth the effort. Once you conquer its steep slopes and granite outcroppings, you will get a 360-degree view of the natural area while you stand atop a 100-metre-wide, 1.4-billion-year-old chunk of rock churned up by a glacier.

Sand Beach Wetlands Conservation Area has one of the most popular swimming areas, facing out onto Amherst Bay of Lake Ontario. If you want to stay ashore, you can still enjoy the viewing platform to admire Long Point Marsh.

Mazinaw Rock looms over Mazinaw Lake, 100 metres above the water, giving an impressive view within Bon Echo Provincial Park. Not only does it produce a great echo – prompting the name of the park – it also has more than 260 Indigenous pictograms that speak to the history of the so-called “painted rock.” You can find it via one of the many hiking trails in the park, ranging in length from one to 17 kilometres, or take a 45-minute boat tour with an interpreter. Daily fees range from $10 to $18.50. The boat tour cost an additional $15 plus tax.

Look Up at The Stars

If you want to see the night sky as clearly as people did a century ago, head to Dark Sky Viewing, 37 kilometres north of Napanee. The clear views allow you to admire the stars without their lights competing with artificial lighting, at the furthest point south in Ontario where you can do this. Admission is free.

The Land O’ Lakes Pet Rescue Farm brings together farm animals with children recovering from trauma, plus other visitors who love furry creatures. You are encouraged to hug the animals here. Admission costs $10 per person with children under age 2 getting in free.

Have a swim party at Varty Lake

Grab your swimsuits and head to Centennial Park for a memorable lakeside visit. Take a dip in the lake then stay to play in the playground and to share a picnic lunch under the covered dining area. If you bring your boat, you can also go paddling or fishing. The site also has multiple public washrooms.

Get a great view of Norway Lake

Puzzle Lake Provincial Park is a true treat for anyone looking to escape into the wilderness for a day. At 9,000 acres, the park gives you a chance to explore igneous cliffs, rocky outcroppings, forests, water bodies and trails. Follow the hydro line to Norway Lake for an unforgettable view.

Tucked at the southwest corner of the lake, you’ll find a delightful swimming area within Lion’s Park, which is cared for by the Tamworth and Area Lions Club. Take a swim, climb all over the playground, then refuel with a picnic lunch. You can also launch your boat from here.

If you want to get out on wood and avoid the sun for a spell, the Lennox & Addington Forest Trail offers eight options through 127 acres of unspoiled nature for hikers and cyclists. The Pines Loop along takes you across 10 kilometres of unforgettable landscape. Take the Dipsy Doodle route to see Big Rock, Little Rock and even Fraggle Rock.

Seek out a shipwreck

Scuba divers can go deep in history by heading underwater to discover several sunken boats in the so-called Amherst Island Graveyard. The Comet went down off the north-eastern tip of the Island near the Brothers Islands, but also look for the remains of the Cornwall and the Maoleglen, with large propellers, rudders and boilers still littering the lake bottom.

Gawk at a hawk

The Cooper’s Hawk nests at Menzel Centennial Provincial Natural Reserve if that bird is on your list of feathered creatures to see. You can keep an eye out for it while you hike on 4.8 kilometres of trails around the 800-hectare property with its abundant wetlands and Mud Lake.

Look for the lighthouse

Weslemkoon Lake lies west of Denbigh and offers great fishing and a quiet getaway for the day. Get there on the water via Weslemkoon Marina. Watch for its five islands with a suspension bridge between two of them and the lighthouse on the south shore near a cottage that has reputedly hosted American inventors Thomas Edison and Henry Ford.

The Cloyne and District Historical Society opens its museum from 10 am to 4 pm daily to showcase its collections that reflect the history of the area from the 1850s, with emphasis on pioneer life, mining, logging, tourism and the building of the Addington Road. Admission is by donation.

Be with the bees

The Bee Spot offers tours where you suit up in beekeeping gear and get a closeup look at a hive. See where honey comes from firsthand for $55 per person.

Seek treasure in these hills

Geocaching is hot here, especially in the summer. The county has 1,500 geocaches hidden throughout its communities, so the hardest part is knowing where to begin! Some may be trickier to find in the snow but have fun trying.

Get the dog out for the day

Camden Lake Provincial Wildlife Area welcomes dogs to explore its 65 acres. It is also a popular spot for birds, with 180 species roosting there throughout the year. You can explore the Blue Heron or Cedar Point trails, which are short but welcoming.

Owls are a hoot

Owl Woods on Amherst Island is a hot spot for birders. If you still want to add Northern Saw-whet, Long-eared, Barred, Great Horned, Boreal, Great Grey, Snowy or Northern Hawk owls to your life list, this is the place to do it. You may also see various types of hawks and waterfowl that make this a Globally Significant Important Bird Area

For some of the most unique rock formations you’ll ever see, drop into the Deerock Lake Conservation Authority on the Elzevir Peatlands Conservation Reserve. The Elzevir Terrane is one of five lithotectonic terranes – essentially a chunk broken off a tectonic plate – in the Central Metasedimentary Belt. The reserve is one of the largest and most continuous peatlands in this part of the province. On top of all that geological history, it’s also a great place to hike.

Bring the dog and your fishing rod to Parrott’s Bay Conservation Area, then explore its six kilometres of trails through the woods, wetlands and waterfront. You’ll want to make a special trip to the lookout at the end of Trail 1 and seek out a geocache hidden somewhere on the grounds. 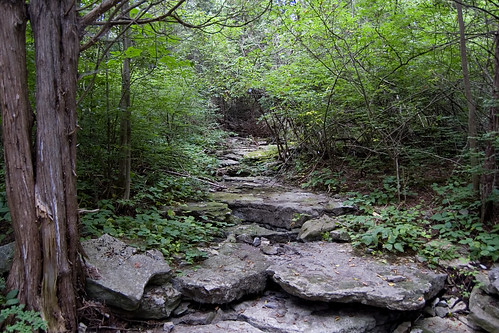 If you love the majesty of towering trees, bring a hiking boots and a camera to Rose Hill Nature Reserve to capture images of these rare, ancient hemlocks, a species that is quickly disappearing. These giants await you along 3.5 kilometres of trails.

Traipse through more than 200 acres of forest around the farm then walk six kilometres out to the bluffs where cannons were once poised to defend Amherst Island during the War of 1812. You can hike or visit the sugar shack via two kilometres of additional groomed trails.

The 103-kilometre trail begins in Strathcona but you can also jump onto it at Newburgh, Camden East or Yarker. It goes for 17 kilometres in this county then carries on to Smiths Falls. Hikers pay $25 for a trail membership for the full year.

For a quick history lesson, take an outing along the Springside Park Trail & Falls and Napanee River Boardwalk for less than a kilometre. You can read about local history on various plaques while enjoying the sound of the water and the nearby train trestle bridge.

Things to Do in Oxford County During Summer

20 Things to Do During Summer in Brant

25 Things to Do in Brantford This Summer

25 Things to Do During Summer in and Around Cornwall

25 Things to Do This Summer in Haldimand County

24 Summer Day Trips With Your Girl Friends From Toronto

Cruise Across the Vast Expanse of Georgian Bay’s 30,000 Islands Aboard M.V. Chippewa III

25 Places For Water Adventures in and Around Ottawa

Summer Activities and Adventures in Grand Bend and Lambton Shores

27 Things to Do Outdoors This Summer in And Around Sarnia

19 Gardens You Should Explore in and Around Ottawa

20+ Reasons Why You Should Visit Perth

15 Small Towns For a Weekend Trip in Central Ontario

Canada Gets a New Loonie That Commemorates Klondike Gold Rush